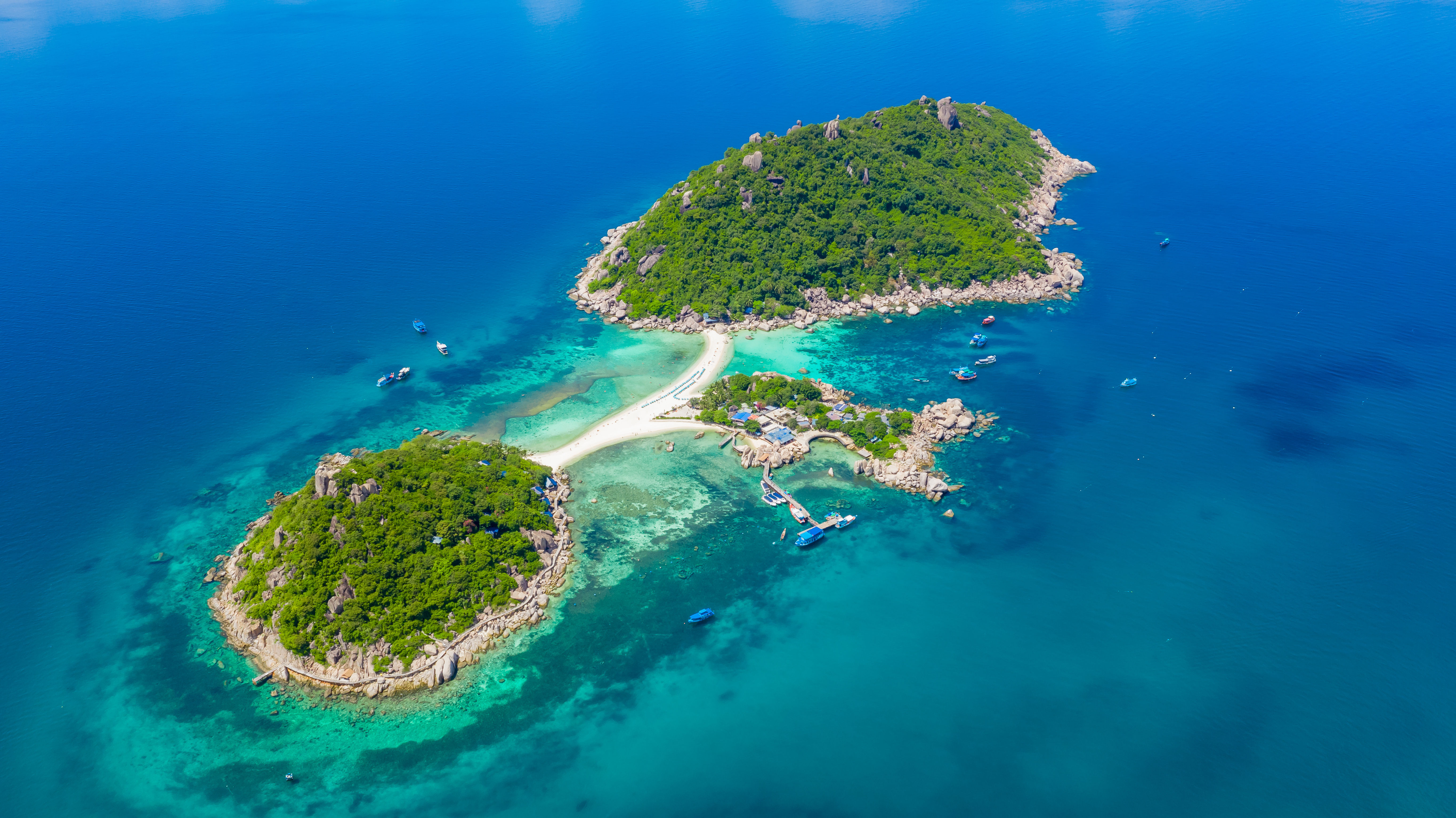 World-famous Koh Tao, with its idyllic white sands and lush island scenery is spectacular and renowned as the place to get your dive certification. Take your pick from 50+ dive sites offering exciting drop-offs, tunnels, reefs, pelagic action and, wherever you look, pristine corals and fish.

On the western shore of the Chumphon Archipelago, in the Surat Thani region of Thailand, is the world-famous island of Koh Tao. These islands include Koh Phangan and Koh Samui, though Koh Tao is quite possibly the most popular among divers. The idyllic island boasts white sandy beaches dotted with swaying palm trees, surrounded by a stunning backdrop of cliffs covered in greenery. The underwater paradise that encircles the island is just as overflowing with abundant life, including hard and soft corals, encrusted pinnacles, colorful reefs with seemingly infinite tropical fish species, eerie shipwrecks, exhilarating drop-offs and tunnels, and even passing pelagics in certain areas.
Renowned as one of the top spots in Thailand to obtain dive certifications, it is also often said to offer the cheapest diving in the country, making it perfectly accessible within anyone’s price range. Dive centers are aplenty, and all offer dive courses from beginner levels all the way up to advanced and professional levels. Thanks to the mostly calm, easy conditions with bright waters in Koh Tao, it’s the ideal location to obtain an open water license or even take an advanced course, as some sites offer slightly more challenging conditions, like currents and depth. Also, many aspiring dive professionals choose the island to undertake their divemaster and instructor courses, as there is a ton of opportunity for those wishing to take their first footsteps in the professional dive industry. With the large concentration of dive centers on the island offering a wide range of dive education, there’s lots of choice in terms of courses, location and price.
There are numerous dive resorts to choose from and over 50 varied dive sites to explore, with most only being accessible by boat. Most dive operators do two-tank dive trips daily, meaning the entirety of your day isn’t taken up by diving, allowing you to discover what else the island has to offer.

Koh Tao boasts great diving all year round, thanks to its tropical climate that ensures beautifully warm air and ocean temperatures throughout the seasons. The main seasons are the hot and dry season, hot and windy season and the wet season.
Hot and dry season runs from February to May, when there’s little rain and the skies are constantly blue. Air temperature can range between 28°C-36°C (82°F-97°F), and water temperatures rarely drop below 30°C (86°F). March to May is the absolute hottest period, and what’s more, March and April offer the best chances to see whale sharks in the area. Visibility is often good and seas can be quite calm, so it’s a great time to scuba dive on the island.
May to October is the hot and windy season, which is welcoming after the soaring temperatures of the previous season. Air temperatures are still hot at around 34°C (93°F), and the sea lingers around 29°C (84°F) on average. Due to the winds, some dive sites may become inaccessible because of big waves, but there are still many dive sites that are sheltered from the wind. July, August and September often see the greatest visibility, often reaching 30 meters or more. So if you prefer cooling winds and better visibility, perhaps this is the time to visit. June to September can be quite busy on Koh Tao, so it’s better to book diving and accommodation in advance.
The wet season runs through October to February, though don’t be put off by the name, as it’s rare that it rains for an entire day. Storms often occur in the late afternoon, which cool daytime temperatures. The monsoon period begins around November, during which temperatures lower a little, and there’s much more rain, with many days experiencing overcast skies and slightly choppier seas. The water temperature can drop to 26°C (79°F), and visibility can sometimes be less during heavy rain, but diving is still possible and the marine life remains unchanged, and whale sharks can even be spotted. It’s also a great time to grab bargains on accommodation and diving, thanks to it being the lowest tourist season.

Koh Tao scuba diving requires an entire encyclopedia dedicated to the subject, as there are immense sites all around the island, from vibrant reefs, exciting wall dives, encrusted artificial reefs and structures, dramatic pinnacles, caves, tunnels and swim-throughs, to epic wreck dives and action-packed drift dives depending on the ocean conditions. Spectacular UV night diving is also ever-popular on the island, where divers can marvel at fluorescent corals that illuminate when the sun goes down. Almost all diving on the island is boat diving, with the vast majority of sites all being accessed by speedboats and larger diving boats.
If the current is strong, the Red Rock dive site can be an exhilarating experience for drift dive lovers. It also boasts amazing drop-offs, making it a great wall dive site. For a maze of swim-throughs, caverns, caves and tunnels in addition to exceptional marine life, head to Green Rock, and Laem Thian Caves similarly boast an epic system of varied topography and impressive natural formations.
Though there aren’t a huge number of wrecks in Koh Tao, the two that stand out are the HTMS Sattakut and the MV Trident, which are both recommended for advanced divers, although those with less experience may be able to visit the site and check out the shallower parts of the sunken vessels.
Most dive sites on Koh Tao are all exceptionally colorful, boasting a plethora of marine life, both big and small, in addition to reefs with vibrant hues and insane amounts of fish. In particular, sites like Japanese Gardens, Laem Thian Bay, and White Rock are classic Koh Tao dive sites, offering unforgettable reef diving, where endless coral gardens and a diverse number of tropical species thrive.
Koh Tao also offers impressive artificial reefs, such as that seen at Buoyancy World and The Junk-yard, which is a strange yet memorable site where an entire gymnasium, a collection of toilets, sunken vehicles and a replica of the Sydney Harbour Bridge all lie at the bottom of the sea. Nature has completely taken over all of these quirky artefacts, and definitely shouldn’t be missed if you want to experience something weirdly different to the rest of Koh Tao’s dive sites.

The island is home to predominantly tropical species, thanks to its perfect geographical location in the Gulf of Thailand. A whole host of life thrives, from macro critters like nudibranch, shrimp and small crabs, to colorful reef fish, schooling fish, turtles and reef sharks. Hard and soft corals are also abundant, including various sponges, staghorn coral, table coral and mosaic and mushroom coral. Large gorgonians and swaying anemones complement the exceptional flora and fauna that decorate the dive sites that are the epitome of beauty. Furthermore, whale sharks are frequent visitors, especially at Chumphon Pinnacle and Sail Rock. There are so many more creatures to name, like schools of barracuda, snapper, moray eels, scorpionfish, lionfish, anemonefish, damselfish, batfish, butterflyfish, lobster, gobies, wrasse and parrotfish. Everything you could expect from the best of tropical diving plus more can all be found around the diver’s paradise that is Koh Tao.

There are boatloads of worthy sites to mention in detail, including Red Rock, HTMS Sattakut, MV Trident, Twins, Hin Pee Wee, Junk-Yard, Hin Wong, Aoew Leuk, Tanote Bay, Buoyancy World, Three Rocks and Pottery,
Laem Tian Bay and so many more. However, to name some of the most famous, we’ll begin with the gulf’s most premier site - Sail Rock. It’s the most famous site in the region, and for good reason. This large pinnacle is teeming with diverse marine life, and even hosts visiting whale sharks. Whale sharks are known to pass by fairly often, so keep your eyes out in the blue for the world’s largest fish.
Chumphon Pinnacle is at the top with Sail Rock. Covered in colorful anemones, encrusted coral, and surrounded by schools of batfish, barracuda and trevally. Whale sharks also visit here, be sure to add this site to your list.
Southwest Pinnacle boasts an arrangement pinnacles covered in anemones. They slope down to sandy, rocky areas, where plenty more life awaits. Shoals of barracuda can be seen, along with cobia and occasional sightings of bull sharks and whale sharks.
Japanese Gardens is a must for those who crave relaxation with picturesque scenery in aquarium-like conditions. Famed for its beautiful collection of hard and soft corals, this spot hosts an array of colorful species, and experiences fantastic visibility most of the time.
White Rock is another unmissable spot, and covers a large area. It consists of enormous granite boulders encrusted with a wealth of corals, with a huge coral garden and sandy areas hosting plenty of critters. The white rock itself is a gigantic monolith that extends from the bottom to the surface.
Shark Island boasts sloping reefs covered with corals and anemones. Tons of life congregate here, including snapper, stingrays, angelfish, turtles, reef sharks and so much more.
Mango Bay is another relaxing site, which is a secluded bay where divers enjoy shallow diving. Expect to see a variety of colorful corals and a ton of tropical creatures, all while basking in calm ocean conditions.