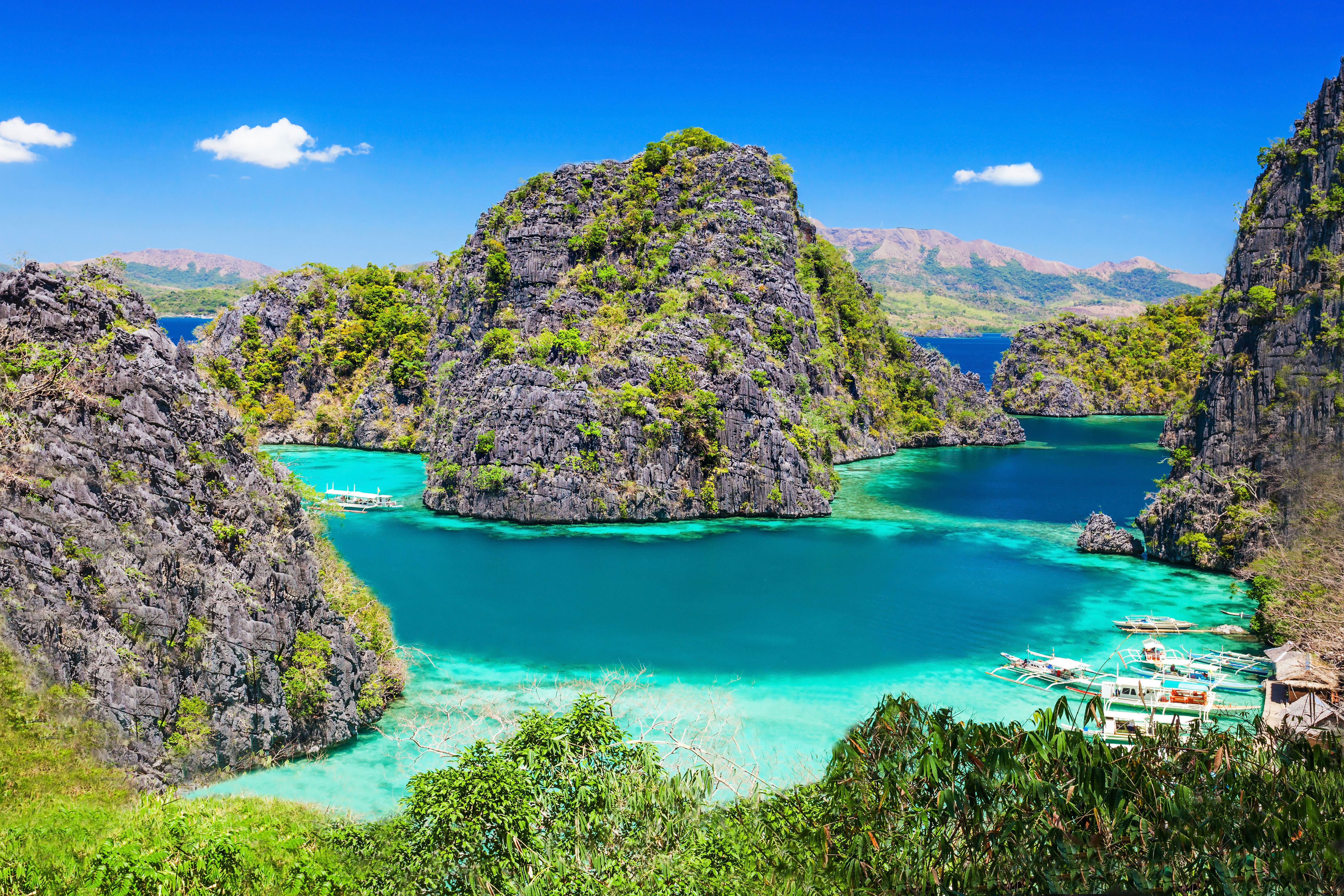 Palawan has been voted the world’s most beautiful island, and it’s easy to see why. The sight of the jagged islands rising from the azure waters, vibrant forests and the stunning diving all combine to make an island otherworldly in its splendour. It boasts the world-famous Tubbataha and Apo Reefs, WWII wrecks in Coron, pelagic life, macro critters… Truly this is some of the best diving in the world.

The allure of El Nido’s incredible white-sand beaches seems to turn even the most seasoned scuba divers into land-lubbers, yet once they have encountered the magic of the underwater realm, it’s infatuation. Explore caves, tunnels, walls and flourishing reefs while searching the blue for dugongs, whale sharks and manta rays. Experience your first dive in El Nido’s calm waters or inspect seabeds for the elusive frogfish, ghost pipefish and mimic octopus.

Peurto Princesa is the gateway to the incredible reefs of Palawan Island. Novice divers can learn to dive in the calm sites of Puerto Princesa’s sheltered bay or travel in style by liveaboard to Tubbataha Reef. Here, divers will find world-class diving among drop-offs, swim-throughs, and thriving reefs with manta rays and whale shark.

Palawan is a huge archipelago of islands, stretching from Mindoro in the north-east to Borneo in the south-west. It is composed of over 1,700 islands and islets but the most populous areas are Puerto Princesa, El Nido and Coron on Busuanga Island. It is over 450km long and 50km wide. Though it is hugely popular as a dive destination, it is yet to reach levels of tourism found in parts of Thailand or elsewhere in the Philippines.

There is a huge variety in diving in Palawan. There are wrecks in Coron Bay, cave diving in Puerto Princesa, world-famous reefs in Tubbataha and excellent diving everywhere else. Certain areas are favoured by particular divers. For example, El Nido in Bacuit Bay has many shallow, gentle reefs so it is popular for beginner dive courses. Coron is preferable to those with at least an advanced certification so they can enjoy more of the wreck diving. Coron is also used as a base to explore the Calamian Islands.

There are plenty of dive resorts and dive centres found in Palawan, mostly in the tourist hubs mentioned earlier - though there are others more off the beaten track. It is known as a backpacker destination and while there are luxury resorts, it is an affordable place to dive. Dive courses are a big business here and you can learn anything up to professional and technical qualifications. Liveaboards are also popular, particularly to far flung locations like Tubbataha Reef, which is only open for 3 months the year due to ocean conditions.

Palawan is extensive, stretching 450km long. Though it is subject to the same dual seasons as the rest of the Philippines, it is more pronounced in the north than the south, near Borneo. The east coast also has a slightly different climate schedule than the rest of the region. Diving is mostly possible year-round, with a few exceptions.

The dry season is from December to June for most of the region. This tends to be the most popular season for holidaymakers too. Unlike many of the other regions, the water temperatures stay consistent all year round at about 28/29oC but deep water, exposed sites like Tubbataha can be cooler. The air temperature is consistently 31oC all year round. This is the busiest time of year as the seas are calmest and diving conditions are most predictable.

Tubbataha has a shorter dive season, stretching from mid-March to mid-June, the only time when the ocean is calm enough to allow the 10-hour crossing from Puerto Princesa. This time is generally busy as it is so short and the liveaboards book up fast.

The wet season, from July - November brings wetter weather. The north has monsoon-like conditions and sometimes experiences typhoons which can ground dive trips. Generally speaking though, on fine days, the diving is still excellent. The southern region experiences less rainfall during this time. The eastern region has less distinct seasons, with no pronounced rainy season. Currents tend to be mild and consistent year round, depending on the site and the tides. The visibility is very good - usually a minimum of 20m, sometimes reaching up to 40m.

It is no understatement to say that Palawan diving offers some of the best diving in the world. Apo Reef is huge and often visited by liveaboards from Palawan. The house reefs surrounding all the diving locations like Coron, El Nido and Puerto Princesa all boast many healthy reef ecosystems which make for excellent dives. Tubbataha Reef is routinely listed as a bucket list dive and for good reason - the diversity on the reef is exceptional and it offers the chance to see some amazing things like tiger sharks and manta rays.

There are some opportunities for cave diving here. Cathedral Cave in Coron has a stunning, sunlit chamber leading to a stalactite filled room in which you can surface. El Nido has Dilumaca Tunnel to explore. Puerto Princesa offers the chance to dive the longest underwater river system in the world.

Known as the wreck capital of South East Asia, the Japanese WWII wrecks in Coron Bay will satisfy the fussiest wreck divers. The wrecks litter the seabed and most allow penetration in multiple places. There are also several other small wrecks such as the one on Apo Reef.

One of the only places which can also offer lake diving, Coron has two lakes to try - Barracuda and Keyangan. Barracuda is unique in its extreme halocline where there can be up to a 10oC difference in water temperatures between the layers.

Liveaboard diving is popular here due to the large distances between the diving locations. Popular destinations include Coron, El Nido, Puerto Princesa, Tubbataha Reef and Apo Island. The Tubbataha liveaboards are limited to three months of the year so can be busy.

The archipelago stretches over such a distance that the marine life varies depending on the locations. Some fauna is omnipresent on the healthy reefs. Reef fish like angelfish, groupers, parrotfish, surgeonfish, pufferfish, butterflyfish and damselfish dance on the reefs, resplendent in their bright colours. Above the reefs, schools of fish swirl in the blue - yellowtail snappers, jacks, lunar fusiliers and giant barracuda. In most places, bigger fish like tuna and trevally can be seen hunting the smaller fish.

If you’re eagle-eyed, lionfish, stonefish and scorpionfish hide on the reefs. Moray eels nestle in crevasses, along with several species of octopus - blue-ringed, coconut, mimic, reef and wonderpus. Cuttlefish, including flamboyant, hunt small crustaceans with their hypnotic patterns. Looking closely at the rocks and corals will yield polychromatic nudibranch and wide varieties of crustaceans such as the porcelain and orangutan crabs and the glass shrimp.

Blue-spotted rays are commonplace on the sandy bottoms. Whitetip reef sharks are often found inside small caves while blacktip reef sharks stalk the blue. Green and hawksbill turtles glide over the reef and eat the many hard corals. Eagle rays and marble rays sightings are routine, sometimes gliding past in formations.

Tubbataha Reef has some of the highest marine biodiversity in the world. With over 350 species of coral, 600 species of fish and 14 species of sharks, you will find something new here. Manta rays and whale sharks frequent the cleaning stations. Strong currents draw bigger fish with it, grey reef sharks are regular sights but you might see tiger sharks or hammerheads too. Dolphins and whales have been seen at many dive sites too - diving with these giants is not something you’ll forget in a hurry.

One of the more unusual encounters you can experience diving in Palawan is diving with dugongs. These marine mammals, thought to be the origin of the mermaid myths of old, are rare. They graze on their sea grass meadows, looking like placid, marine cows

Cuttlefish Shawl, Puerto Princesa - This site has a max depth of 20m but is home to lots of marine life. There are turtles, schools of barracuda and fusiliers and, as the name might suggest, lots of cuttlefish! Dugongs have also been sighted in the bay occasionally. Another popular site here is Mares Rock.

Barracuda Lake, Coron - This lake is a mixture of freshwater lying on warmer saltwater, separated by a visible halocline. Dramatic limestone pinnacles and the surreal experience of sinking into thermal spring-warmed water found below the cooler freshwater will make up for the lack of marine life.

The Wrecks, Coron - The famous Japanese WWII wrecks lie at a variety of depths, some are suitable for open water divers (like Okikawa Maru) while some are only accessible to technical divers (like Irako and Akitsushima). Most of them are intact and can be penetrated in a variety of locations. Ammunition, tools and other equipment litter the wrecks and the surrounding sea bed making these fascinating wrecks for everyone, but especially those interested in wreck diving or world history.

The other wrecks are Olympia Maru, Kogyo Maru, Kyokuzan Maru, Tangat Wreck, Lusong Gunboat, Sangat Gunboat, Nanshin Maru Skeleton Wreck. It is thought that there may be more down there which have yet to be discovered.

Apo Reef - Though technically within the borders of Mindoro, Apo Reef is often visited via liveaboard from Palawan. The second-largest barrier reef in the world, this site has some of the best reef diving. Its status as a UNESCO World Heritage Site is reflected in the diversity with hundreds of variety of corals and fish.

Tubbataha Reef - Accessible only by liveaboard (it’s 10 hours boat ride from Puerto Princesa), this UNESCO World Heritage Site is routinely listed as one of the best dives in the world. It has dramatic underwater scenery, over a dozen species of sharks, whales and dolphins and hundreds of species of fish, corals and birds, it is known as a hub of diversity.

El Nido - There are lots of great dive sites around El Nido. Tagbao Islands have some stunning reef diving, known to be calm and fairly shallow so they are popular with beginners. Dilumaca Tunnel is a 35m long tunnel which starts are 12m, has a sandy bottom and several holes in the ceiling; good for more experienced divers. North Rock has passing pelagics. Other sites include South Miniloc, Entalula and Nat Nat.

There are hundreds of dive sites in Palawan, some other notable mentions go to The Wall at Roxas and Bulawit Bay in Linapacan.

You can obtain your Open Water Diver in El Nido.

You can obtain your Discover Scuba Diving in El Nido.