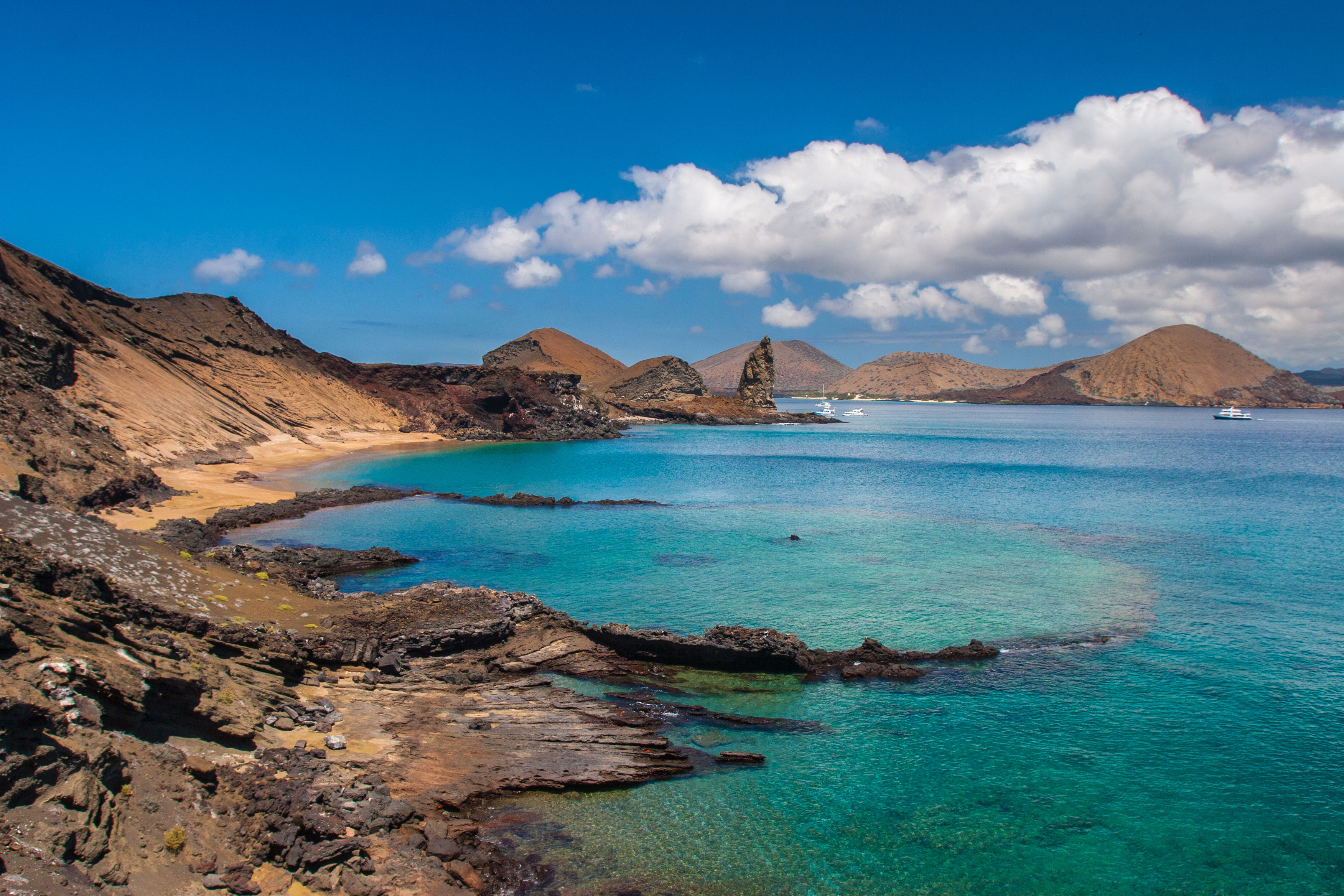 Ranked as one of the top 20 places in the world to dive, Ecuador is full of wildlife above and below the water line. Discover the Galapagos Islands’ incredible biodiversity, schooling hammerheads and thrilling current dives or stay close to the mainland for equally impressive national park diving.

Home to some of the most biodiverse life on the planet, Ecuador offers nature lovers an exceptionally special experience, above and below the surface, thanks to being heavily protected over the years. While there are beautiful reefs and colorful species to be seen, the diving in Ecuador is more for those seeking out adventures with large pelagics and marine mammals, attracted by strong currents and upwelling that nourish life here. Beginner divers and snorkelers can enjoy marine life here, although some sites are better suited to those with more experience.

The Galapagos Islands are where most divers go, which host a number of endemic species. Much of the marine life has not learned to fear humans, thus divers often find themselves enjoying intimately close encounters with curious critters. Divers can relish the history of Darwin here while gazing at unique marine species that thrive in this heavily preserved marine park.

Ecuador’s coast similarly has some amazing diving, particularly in Machalilla National Park, which is the only marine park by the mainland. Perfect for those who want to see some of the same species that lives in the Galapagos, without the traveling nor the higher cost. The best diving here is around Isla de la Plata, about two hours by from Puerto López.

There are plenty of dive centers and dive resorts to choose from, but many divers opt for liveaboards, for easy access to dive sites further afield, such as those at Darwin Island, Wolf Island and Punta Vicente Roca.

It’s hard to say when it the best time, as it entirely depends on personal presence for climate, and what critters you want to encounter.

January through June is the wet season, with powerful but brief showers, and water temperatures ranging between 20-25°C (68-77°F). In some parts, temperatures can climb to 28°C (82°F) between January and April. Although these aren’t necessarily difficult temperatures, some areas experience significantly colder numbers due to currents, such as at sites around Punta Vincente Roca.

The dry season runs from July to December, when it’s the high season. There’s much less rainfall, but temperatures are noticeably cooler than the wet season, and seas are generally rougher. Water temperatures are normally anywhere from 19-23°C (66-73°F), so perhaps some extra exposure protection is a good idea for those who suffer discomfort in chillier waters. This season is also when whale shark sightings peak, among other much loved creatures.

In any case, no matter the season, it’s recommended to bring extra layers of exposure protection due to some areas seeing differing and fluctuating temperatures as a result of currents and upwellings. It’s better to have it and not need it, than to need it and not have it.

Ecuador offers a multitude of diving for all levels of experience, from beautiful walls, some reef dives and amazing topography like caves and tunnels. But at many sites, especially those in the Galapagos, there’s strong currents and surge, so be sure to be ready for a few drift dives.

Drift diving is common, especially around the Galapagos Islands where the currents are often strong, especially at sites like Cabo Marshall in the north, and Mosquera and Kicker Rock in the south, to name only a few well known spots. Almost all the sites see varying levels of current, but it's not a bad thing, as currents usually mean epic pelagics, like giant manta rays, mobula rays and sharks, that live all around the Galapagos.

There are also caves to discover, such as at Northeast of Wolf Island. Frequented sites include The Pinnacle and Caves, which as their names suggest, boast impressive caverns and underwater pinnacles as a result of wave erosion.

The majority of diving in Ecuador, both by the mainland and in the Galapagos, is by boat. Day trips can be made by land-based operators, but for the best experience, it’s recommended to go for liveaboard trips, especially to the Galapagos.

While scuba diving in Ecuador, ranked as one of the top 20 places in the world to dive, you’ll discover that the question is really “what marine life can’t be seen here?” The number of species far exceeds imagination, due to the sheer volume of marine diversity thriving in this part of the world.

To name only a few of the creatures thriving in these waters, we’ll start with the beloved whale shark. The best time to see them is June until November in the open water around Wolf and Darwin Islands. Other delightful creatures that appear in higher numbers this period are penguins and the awkwardly beautiful mola mola.

Another highlight of Ecuador is school hammerheads, of which a sizeable population stays in the Galapagos all year round. Gordon Rocks is a good spot to see them no matter the season, but there are some places where divers can experience a ‘solar eclipse’ of hundreds, if not thousands, of schooling hammerheads. Darwin and Wolf Islands are undoubtedly the place to be if you’re craving hammerhead sightings.

Overall, in addition to a huge amount of varying shark species, dives can see manta rays, dolphins, whales and infinite turtles all over Ecuador. Other critters include large seahorses, four-eyed fish, butterfly and trumpetfish, and even unusual animals not often seen by divers, like marine iguanas, seals, sea lions, and penguins.

Diving in Ecuador focuses mainly around the world class diving found in the Galapagos Islands found roughly 600 miles (1000km) from the Ecuadorian coast.

Starting with Kicker Rock is on the west side of San Cristobal, this is a popular site where dives come to spot schooling fish, various pelagics, and other creatures such as turtles and octopus. This site is suitable for those with lesser experience, as the current normally isn’t as strong as in many other parts of the Galapagos.

One of the most famous sites is Darwin Arch, near Darwin island. It’s quite possible that there’s too much to see here, from all kinds of sharks, some of which are pregnant, to schools of large fish like jacks and tuna, rays and turtles.

Wolf Island holds many precious sites, one of which is a particular favourite - Shark Point. Here divers can enjoy schooling hammerheads, silky and Galapagos sharks, eagle and mobula rays, turtles, tuna and reef fish. While submerged, you can often hear the whistling of nearby dolphins chatting to each other. Because of currents here, it’s better suited to experienced divers.

As mentioned, Gordon Rocks at Santa Cruz Island is one of the best sites to swim side by side with hammerheads. But they’re not the only showstoppers here, as divers regularly encounter many other shark species, rays and plenty of colorful fish.