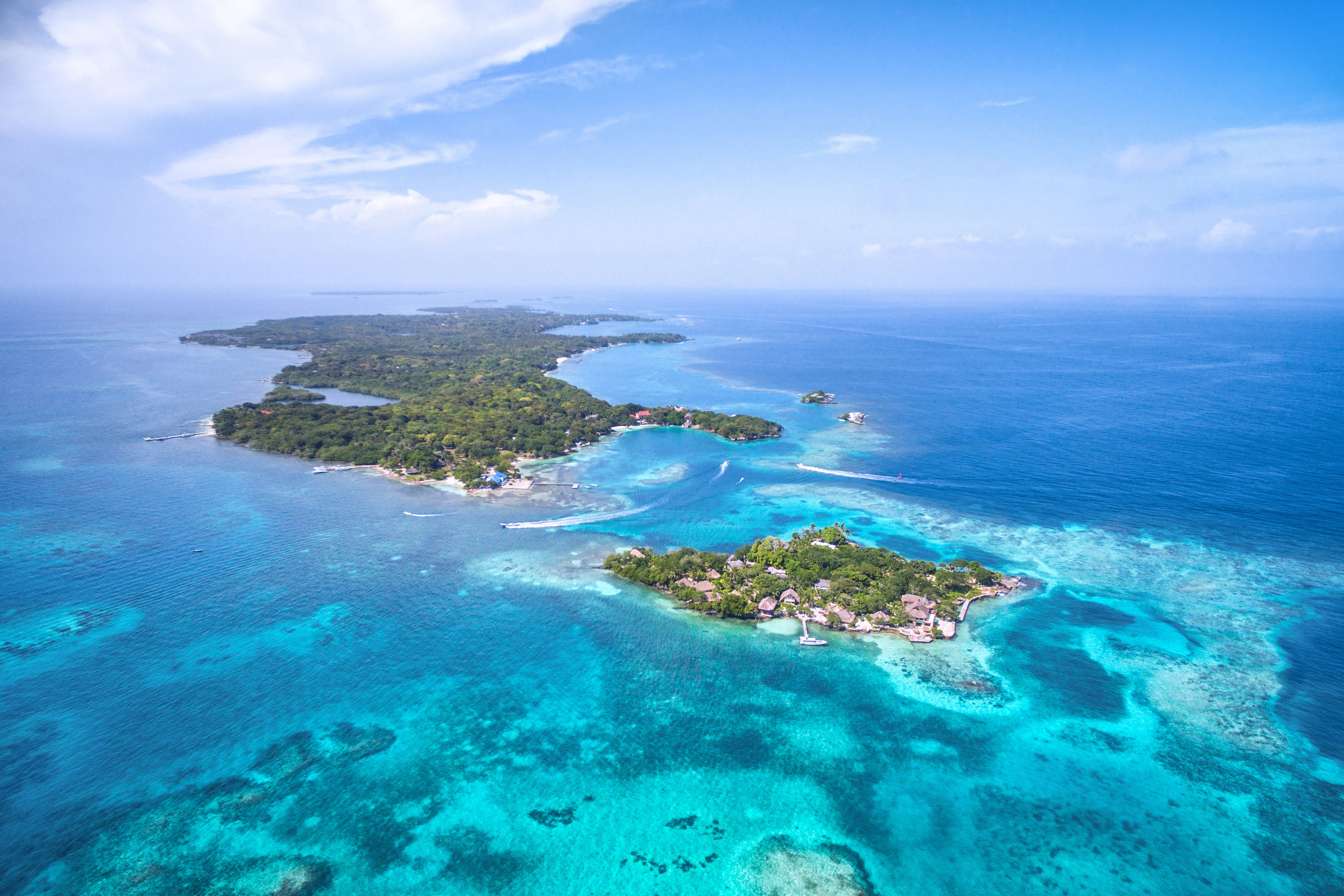 With coasts on both the Pacific Ocean and the Caribbean Ocean and schools of Hammerhead Sharks of over 500 individuals in Malpelo Island along  with the chance to see Humpback Whales, and all in clear and warm waters - that’s what makes diving in Colombia a must!

Colombia is a country which lies on the north west coast of South America, its capital city is Bogota. Its coasts border on the North Pacific Ocean and the Caribbean and there is an exciting array of different kinds of diving experiences to be had here. Columbia is classified as one of the Megadiverse Countries of the world, meaning it is one of the countries harbouring a high density of the world's marine species. Due to this, marine conservation and marine protection are important. Some of the diving locations have a high number of dive centres and dive resorts, but some locations lie offshore or in locations which are only accessible by day trip boats or liveaboards. Some of the spectacles which can be seen here are the third largest coral reef in the world, the chance to see the graceful Humpback whales, to dive among schools of around 500 sharks and more! There are many different types of diving which can be done here which include some exhilarating wreck dives, some thrilling steep walls, a Blue Hole, caves, caverns and more.

Providencia, San Andres and Catalina are three islands which lie in the Caribbean are some of the best diving locations here. Alongside these, some of the main diving destinations include Cartagena, Medellin, Cali and Taganga. Having both the Pacific and the Caribbean coast means many different types of diving which are bound to excite divers of all levels and of all interests.

There are some diving locations which have some spectacle species which should not be missed, but they are only there seasonally. Between July and October Humpback Whales can be seen at Gorgona Island. Between January and May, divers can dive alongside many Hammerheads at Malpelo.

There are many kinds of diving here which are bound to spark some increased heart rates with many different kinds of divers. If novice divers are wanting to explore these waters, Taganga is the kind of diving location which caters perfectly to divers wanting to either dive for the first time or to take further diving courses. For the more experienced and thrill seeking divers, the steep volcanic ridge at Malpelo Island drops down more than 3000 metres and is the main area where large schools of Hammerheads congregate. Malpelo is also known for its multiple rock formations including exciting sea caves.

At Providencia, there is a popular german shipwreck, called El Planchon, which lies at very shallow depths for divers of all levels to enjoy. Providencia is a fantastic location to admire a flourishing coral reef, along with the many species which inhabit them. Underwater photographers definitely need to keep their cameras at the ready. Combining both wrecks and marine life, Sebastian de Belalcalazar is a navy ship which was sunk in 2004 to create an artificial reef, and it has done that job perfectly; it is now teeming with marine life! A lot of the islands and dive sites here are only accessible by liveaboards or by day trip boats.

Being classified as one of the Megadiverse Countries in the world, the density of marine life is incredibly high here, and that is definitely something divers will notice here. The reefs are made up of an impressive collection of corals, around 85 species, with an array Sea Sponges, including some magnificent Barrel Sponges, large, majestic Gorgonians, Hard Corals, Soft Corals, Sea Fans, Anemones, Algae and Seagrass also being in the forefront.

There are over 200 species of fish which inhabit these waters. Some of these smaller reef fish include Angelfish, Surgeonfish, Parrot Fish, Puffer Fish, Butterfly Fish, Trevally, with other species such as Moray Eels, different species of Rays and Octopus also often making an appearance. Other fish include Tuna, Snappers, Barracuda, large Groupers and Jacks. Of course, the main spectacle here, which is also what attracts many divers here, is the sharks. The species spotted here include Hammerhead Sharks, Silky Sharks, Whale Sharks, Nurse Sharks, and more. There is also the chance to spot Humpback Whales at Gorgona Island.

Providencia has been voted as one of the top diving locations in Colombia. It's also a UNESCO protected area meaning the marine life here is flourishing. Alongside the stunning corals, there are also multiple species of Sharks here, shipwrecks, caves and even a Blue Hole.

Visiting this island is a truly unique experience. This rock island can only be reached by day trip boats and liveaboards but it is absolutely worth it. This is the top diving location to dive with sharks including Whale Sharks and Hammerhead Sharks. It has been said divers have seen schools of over 500 sharks at a time.

The island used to be a prison island but now it is a breeding site for Humpback Whales and many other exciting marine species. The dive sites here are thrilling including wrecks, cliffs and more.

Located near the Panama border and is one of the more remote diving locations as it’s not easily accessible. For this reason, the coral reef here is in great condition and truly thriving.

This is the type of diving location where there are a high number of dive centres and dive resorts where divers can get certified for a cheap price. It’s in the Caribbean and it is a great place to learn how to dive. Taganga by Santa Marta, lies near Tayrona National Park and holds a high density of marine life, from schools of reef fish, to large Barracuda, to sharks and more. There are also numerous caves and wrecks to explore here.