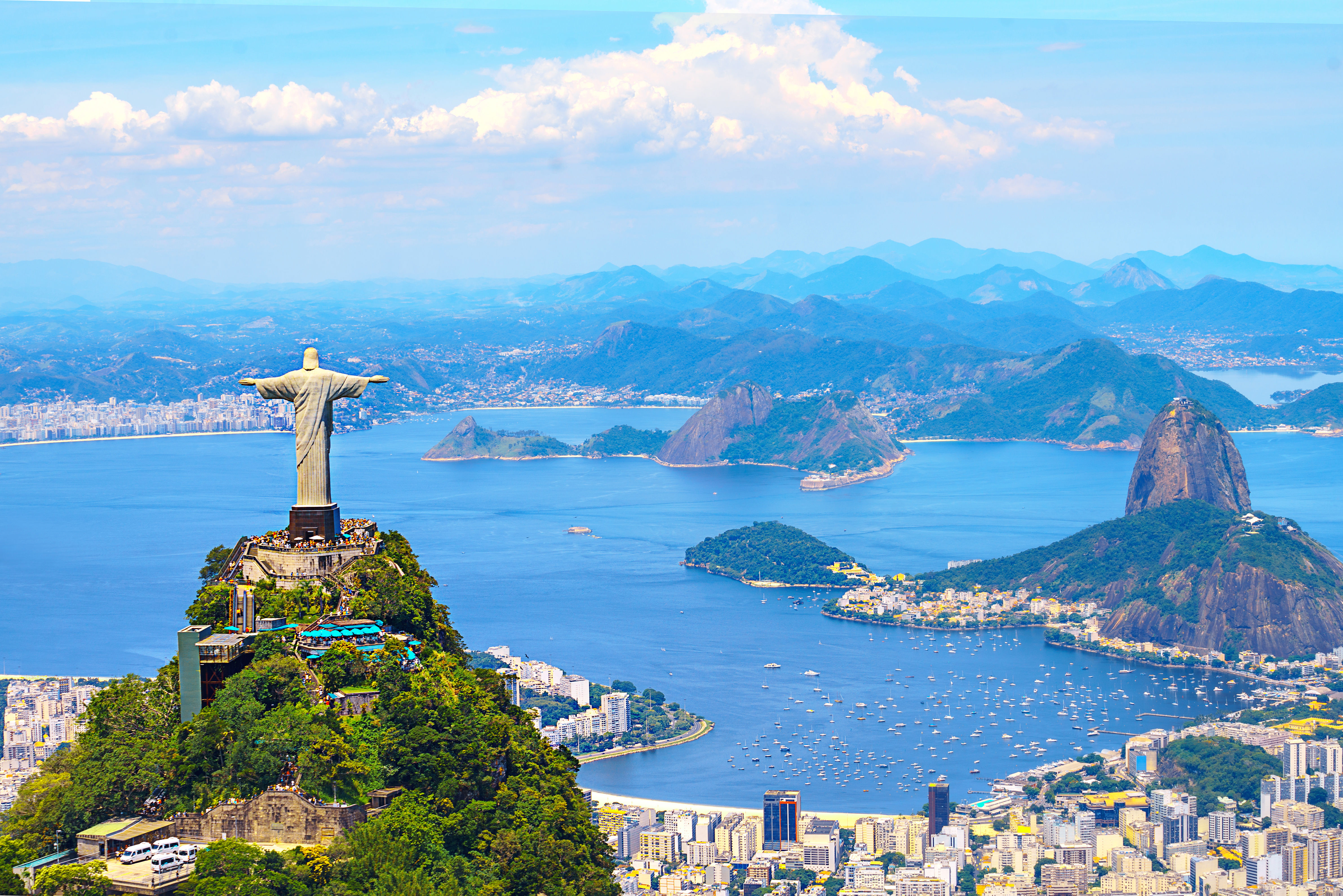 Known for its colourful, thriving reefs and diverse underwater landscapes stretching along the coast, Brazil has something for all divers to enjoy. Discover over 100 hundred wrecks and Amazon River diving with elusive pink dolphins, a mesmerising underground lake and numerous rays and sharks.

Pernambuco is a state on the northeast coast of Brazil that includes the scuba diving destinations of Recife (also the capital of Pernambuco) and the archipelago of Fernando de Noronha. Due to its location close to the equator, temperatures are warm year-round, with an average of 26°C (79°F).

Fernando de Noronha is a chain of islands about 350km offshore, and is protected as a National Marine Park and UNESCO World Heritage Site. These islands rise up from the southern Atlantic Ocean’s submarine ridge, and their surrounding waters act as vital breeding and feeding grounds for tuna, sharks, sea turtles, and spinner dolphins. In addition to these fauna types, this protected area is home to 230 species of fish and 15 species of coral.

Recife, the capital and largest city of Pernambuco, is considered the shipwreck capital of Brazil. Due to the proximity of a long reef running parallel to the harbor of Recife, there is a large number of shipwrecks along this reef. Despite good year-round diving conditions and plentiful marine life, ocean conditions can be rough. Therefore, these dive sites are meant for advanced divers.

The state of São Paulo is on the southeast coast of Brazil, about 300km west of Rio de Janeiro, and is the most populated state of Brazil. The best dive sites of the region can be found at the island of Ilhabela (just a few kilometers offshore from the state’s coastline) and the Laje de Santos Marine Park, which is about 35km from the coastline. Due to the region’s nutrient-rich waters, visibility is normally about 5m, but can increase to 25m in the summertime.

Brazil is among the most exquisite places on Earth to dive, and with 5,000 miles of coastline from north to south of the country, the marine life is extremely diverse. Sites have great visibility for the majority of the time, and with such a large amount of dive spots with varying conditions, there are plenty of locations to choose from that are suitable for divers of all levels. What's more, with its amazing coral reefs, dramatic underwater topography, awesome shipwrecks and a myriad of marine life from big pelagics to tiny macro, it’s truly a diver’s heaven.

Divers are spoilt for choice with dive resorts, dive centers and liveaboards available no matter the season. Similarly, there are endless options for those wanting to pursue dive courses, with varying prices and a multitude of locations to choose from. Although diving some parts of Brazil are more expensive than anywhere else in the world, it’s definitely worth the cost to experience the breathtaking, unspoilt underwater world in this incredible part of South America.

As Brazil is an all year round scuba diving destination, it’s hard to say when is the best time. The high and low season have equal advantages, so it all depends on what you aim to see, your diving conditions preferences, budget and level of experience and comfort. For example, the best diving for beginners is July to November thanks to milder conditions. Furthermore, if you want to see specific seasonal creatures, whales in the Abrolhos during the mating season for example, your best bet is also July to November.

Brazil’s climate is tropical and is warm throughout the year, with the dry season being from around May to August, and the rainy season from October until March. The hottest months are typically September and October. The summer months, and resulting high season is from December until February, where tourism is at its highest and prices tend to be more expensive. Water temperatures are quite consistently warm all year round, staying mostly at about 27ºC (81ºF). Summer and winter ocean temperatures only differ by a couple of degrees usually, which isn’t exactly a dramatic change for divers to endure. In the air, the minimum temperature is 21°C (70°F), while the average maximum is 27°C (81°F). The constant warm sea and air temperatures means that there really is no bad time to dive in Brazil should chilliness be a problem for you.

Due to its lengthy coastline, there are various kinds of dives to be done in Brazil. The country is especially known for its colorful, thriving reefs that line the entire length of the coast, from the northeast all the way to the rockier, clear dive sites in the south. A lot of the sites are mesmerising reef dives, like those situated in Fernando de Noronha, which is considered among the best dive sites in Brazil. Here divers have it all - warm sea, caverns, tunnels, rock formations, colorful fish, vibrant reefs full of life, turtles, rays and sharks.

Brazil is also famous for its epic wreck dives, with a seemingly endless number of shipwrecks to explore. In Recife, there are over 100 vessels are dotted around on the ocean floor and overflowing with life. A notable wreck dive is the Florida, which is covered in colorful sponges and coral.

Brazil also boasts great cave diving spots, even those suitable for beginners, one such being the freshwater Anhumas Abyss in Bonito. Divers and snorkelers venture here to marvel at a naturally formed underground lake, where only a short period of sunlight occurs daily. Here, large schools of fish flourish in crystal clear visibility despite a lack of sunlight.

The Brazilian Amazon, home to the Amazon River, is similarly a fresh water spot to see some extra unusual creatures in the water, and the aquatic life is just as abundant and diverse as on land. In particular, it’s a great freshwater diving spot to see the elusive pink dolphin, about which, very little is known.

When it comes to marine life, Brazil has almost everything. From reef fish and diverse coral species, to turtles, mantas and whalesharks, it’s an epic place to take your next diving trip.

If the elusive whaleshark is a favourite of yours, head to coastal waters, from Ceará to Rio Grande do Sul States and at the small isolated offshore islands, such as Fernando de Noronha, Sao Pedro & São Paulo (not the city!) and Trindade.

For other pelagics, especially sharks, perhaps pay a visit to São Pedro and São Paulo (again, not the city!) which is a small archipelago in the mid-Atlantic ridge of the equator. Here, many pelagics stop by during their migrations. The best time to see them is from January until June.

Furthermore, 144 miles away from the coast of Brazil in the Brazilian State of Rio Grande do Norte is a small island named Rocas Atoll and is a UNESCO World Heritage Site. Lemon sharks make appearances here, along with reef and nurse sharks, among a wealth of other marine critters.

The beloved manta ray also graces Brazil with its presence, which is a welcomed treat for any diver. Laje de Santos is a famous site that is part of the marine park off the coast of Sao Paulo. Manta rays often fly by here and put on a show for many dives who come here specifically to see them. The site also hosts macro critters like nudibranchs, as well as larger animals such as dolphins, turtles and even whales.

These are made up of 21 islands, and are considered the best place for scuba diving in Brazil. Boasting 50 meter visibility and warm water, divers often see wrasse, barracuda, eels, sharks, stingrays and dolphins.

is similarly known for amazing diving all year round with warm water and rich marine life. One of the best places is Ilha da Ancora, where the currents and coral reefs house eels, exotic fish, turtles and manta rays.

Other favourite sites include Papagio Island, Franceses and Porcos. For wreck enthusiasts, visit Arraial do Cabo and Cabo Frio where there are over 40 sunken vessels.

Finally, for those staying in the big city, Ilha Rasa near Rio de Janeiro boasts tons of coral formations and a wealth of fish species. The Buenos Aires and Galeao wrecks are also awesome spots to dive here.