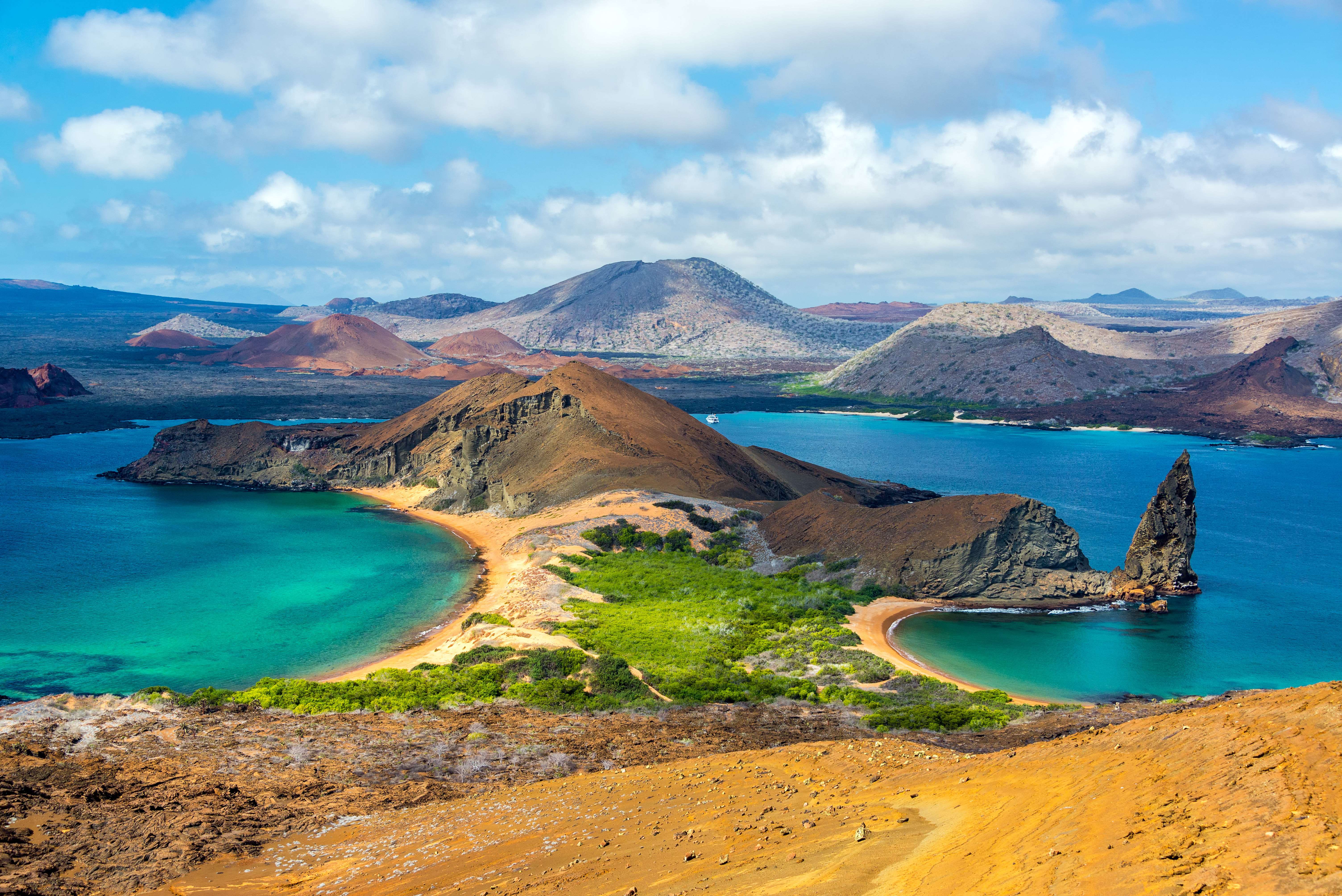 Known for its colourful, thriving reefs and diverse underwater landscapes stretching along the coast, Brazil has something for all divers to enjoy. Discover over 100 hundred wrecks and Amazon River diving with elusive pink dolphins, a mesmerising underground lake and numerous rays and sharks.

With coasts on both the Pacific Ocean and the Caribbean Ocean and schools of Hammerhead Sharks of over 500 individuals in Malpelo Island along  with the chance to see Humpback Whales, and all in clear and warm waters - that’s what makes diving in Colombia a must!

Ranked as one of the top 20 places in the world to dive, Ecuador is full of wildlife above and below the water line. Discover the Galapagos Islands’ incredible biodiversity, schooling hammerheads and thrilling current dives or stay close to the mainland for equally impressive national park diving.

The size of South America is exactly what you can expect in terms of variety when it comes to diving. Depending on the season and the location, you can enjoy warm tropical waters with an abundance of marine life, corals and volcanic activity, to chillier seas filled with whales and rare critters thriving en mass. It doesn’t matter your level of dive experience, South America has something for everyone.
Due to its sheer size there really isn’t a best time to dive in this continent. Thanks to its size, there are multiple different climates occurring at any given time, so be sure to do your research if you have temperature preferences when diving. As it’s in the Southern Hemisphere, southern Latin America tends to experience favourable diving weather from September to February, which usually warmer. However, countries in the north of the continent are consistently hotter due to being close to the equator, which is great for divers who love tropical conditions.
With plenty of dive centers and resorts all over South America, divers have a wealth of choice. What’s more, liveaboard fanatics will be pleased to know that there are a fleet that venture all around this buzzing continent. Due to its seasons, amazing marine life, underwater currents, varying temperatures, depths and topography, it’s also the perfect place to take any dive courses you may be interested in.

South America has a great myriad of breathtaking dive sites, including famous spots such as in Brazil, Columbia, and the incredible World Heritage Size that is the Galápagos, which is home to some of the rarest creatures on Earth above and below the waves.
The Galápagos Islands, located in the Pacific west of Ecuador, are world famous for their conservation, diverse life and even extremely rare species, 20% of which are only found there. Due to deep sea upwellings, the ocean around these volcanic islands are rich in nutrients, which support such a varied ecosystem. Within this entirely protected national park, divers can encounter Galapagos sharks, whalesharks, rays, marine iguanas, turtles and sea lions. The Galapagos Islands should be on every diver’s to-do list - no excuses.
Brazil similarly is just as special for diving, particularly the island of Fernando de Noronha. This marine park and UNESCO World Heritage Site hosts an array of species, from tropical fish and turtles to reef sharks and manta rays. This little island also boasts Brazil’s biggest sea turtle colony, as well as a breeding population of spinner dolphins. To top it all off, visibility here averages at around 50 meters (164 feet), although the downside to all this beauty is strict control of the area. An expensive tourist fee plus rigorous conversation rules only allow a limited number of divers at any given time means that diver numbers are kept under control. Close to Rio de Janeiro is a diving haven named Arraial do Cabo. Here, 40 dive sites with crystal visibility, minimal currents yet slightly cooler water, means it’s ideal for beginners. For more advanced divers, there are caves and wrecks to explore. Also near Rio de Janeiro, pristine reefs, thriving marine life, caves and wrecks can be enjoyed while diving in warmer water.
Let’s conclude with an absolute diving gem - Colombia. Notably, the islands of Providencia and Santa Catalina are an exceptional treat for adventure seekers. With over 40 dive sites and the third largest coral barrier reef on Earth, divers can experience exceptionally beautiful reefs, caves, blue holes and sunken pirate ships in this mostly UNESCO protected space. Malpelo is a favourite among many divers, and for a great season. Picture huge schools of hammerheads, pelagic fish and silky sharks that block out the sun due to their sheer volume. Volcanic ridges combined with currents usher in enormous crowds of marine species. However, do note that this site is for advanced divers only due to conditions that beginners may find unsuitable. What better reason to acquire your advanced certification?