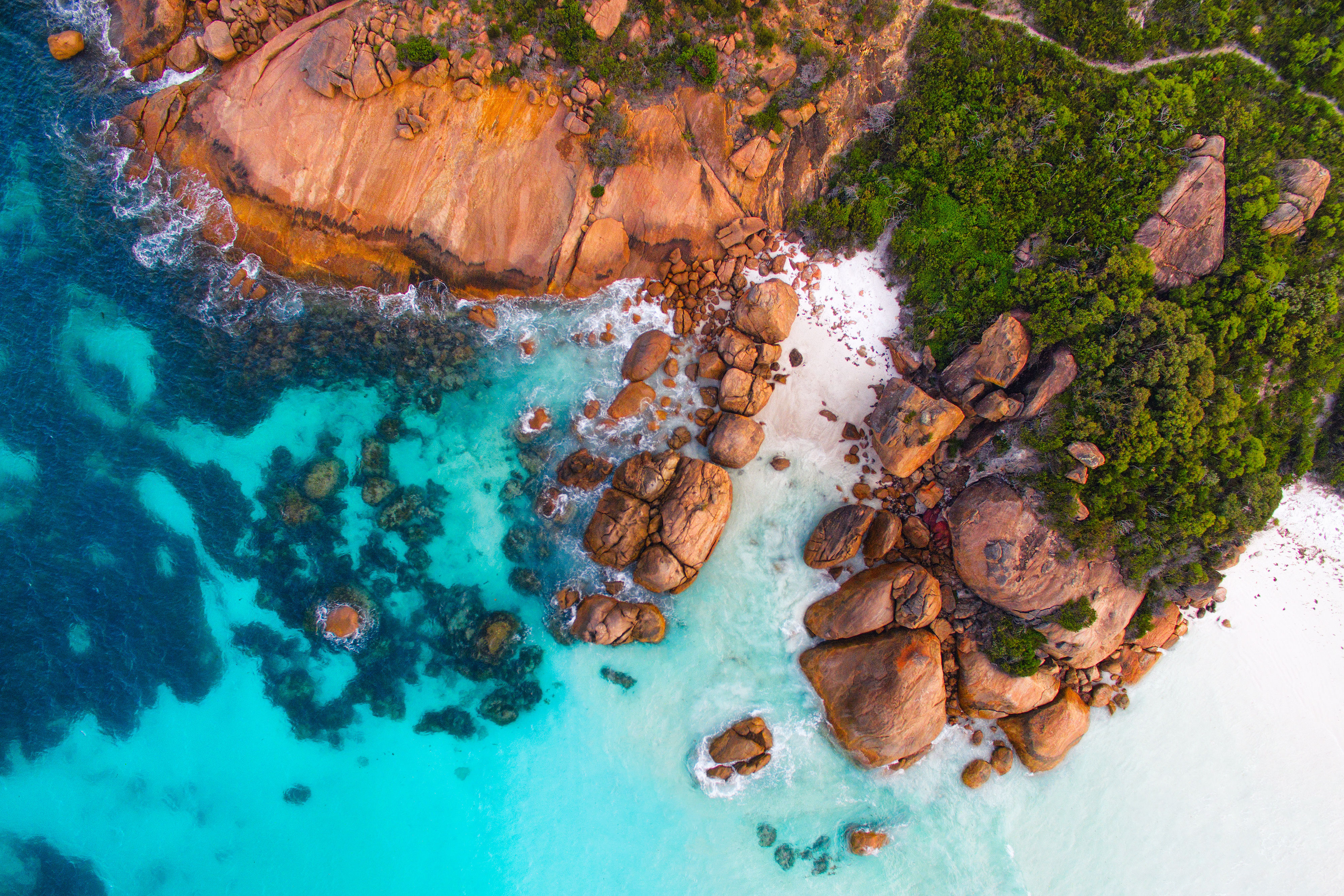 Western Australia’s unique coastline is a scuba diver’s paradise, from diving with the largest fish in the world, the whale shark, to exploring the many historic wrecks. Whether you want to complete your first dive or delve into more challenging sites, scuba diving Western Australia has something for you, with humpback whales and manta rays to accompany.

Coral Bay is the gateway to the unique marine life found at Ningaloo Reef, with over 500 species of fish and 300 coral; everything from manta rays, humpback whales, and whale shark can be seen. Learn to dive in sandy flats and shallow coral plateaus or head out deeper to adventure around pinnacles and swim-throughs.

The lesser travelled state of Western Australia (WA) rewards those who delve into its rugged coastline with incredible marine life and sites where you may have the water completely to yourself, with not another diver seen for miles! Starting from the most remote area found while WA diving, Broome, divers can explore Western Australia’s best-kept secret of Rowley Shoal Marine Park. Only possible to visit via liveaboards, the three huge coral atolls have towering walls, thrilling drift dives, and awe-striking reefs which are visited by manta rays, humpback whale, and hammerhead shark - pure magic!

Another place for divers to witness manta rays and humpback whale are Exmouth and Coral Bay, the gateways to the shallow reefs, seagrass, and intricate swim-throughs of Ningaloo Reef. Home to 500 species of fish and over 300 species, Ningaloo is the place to see the whale shark, where you can swim beside the fascinating creatures. At Exmouth, macro critters can be found within Lighthouse Bay among crevices and overhangs while dugongs feed in patches of seagrass.

Further south, Geraldton is the access point to the intricate reefs of the Houtman Abrolhos Islands. Found among the chain of 122 islands divers can discover numerous wrecks in the ‘Graveyard of Ships’ while the Australian sea lion, bottlenose dolphins and sea turtles all reside in the Abrolhos’ waters. While scuba diving Western Australia, visiting the state’s capital city, Perth, is a must. Here, divers can enter by the shore to observe the western rock lobster, which is prominent to the area, or head further offshore to Rottnest Island to search for weedy sea dragons, wobbegong shark, and grey nurse shark sheltering in caves and seagrass meadows.

Rockingham and Busselton provide access to the famous HMAS Swan Wreck while travelling further south at Albany, divers can admire the HMAS Perth. While at Albany, head to Seal Cove to dive with sea lions who bound out to greet and spend a whole hour swimming with you! At many of Western Australia’s remote dive locations, dive centres are few and dive resorts non-existent, so often the best way to explore WA diving is via liveaboards.

Found at Exmouth, the Navy Pier is ranked by many divers as the top ten land-based dive sites in the world. With a maximum depth of 15-metres, divers can explore an aquarium of life, from the large odd-looking wobbegong shark to the also odd-looking macro-critter frogfish! The Navy Pier offers something for every diver, with both visiting pelagics and the incredible ‘small stuff’, residing here.

The Rowley Shoals Marine Park consists of three absolutely breathtaking coral atolls. With access from the city of Broome, divers can explore the Mermaid and Clerke Reefs where everything from drift dives to staggering wall dives are available. Only accessed by liveaboards, it’s likely the only other company you’ll have are manta rays, hammerhead sharks, and the 686 different species of fish that visit the shoals.

Ningaloo Reef, accessed from Exmouth or Coral Bay, is Australia’s only fringing reef and a UNESCO World Heritage Site. There is an incredible variety of marine life here, and dependant on the time of year it is possible to see a whale shark, humpback whales, and manta rays all at the same time! With over 260 species of hard coral the limestone caves, ocean pinnacles, and cleaning stations are a pleasure to discover whether on dive courses or as a certified diver.

On the Houtman Abrolhos Islands, shipwrecks, murder, and mutiny have all happened. In 1692, the infamous Batavia Wreck sunk leaving many dead and while the survivors headed for help, a mutiny was led that murdered all but 100 of the 268 survivors. Among these historical wrecks, the islands have pristine interlocking reefs to discover. Another historical wreck is the HMAS Swan near Dunsborough. The former destroyer escort has many possibilities for penetration and has become a flourishing artificial reef.

Other places to dive in Australia