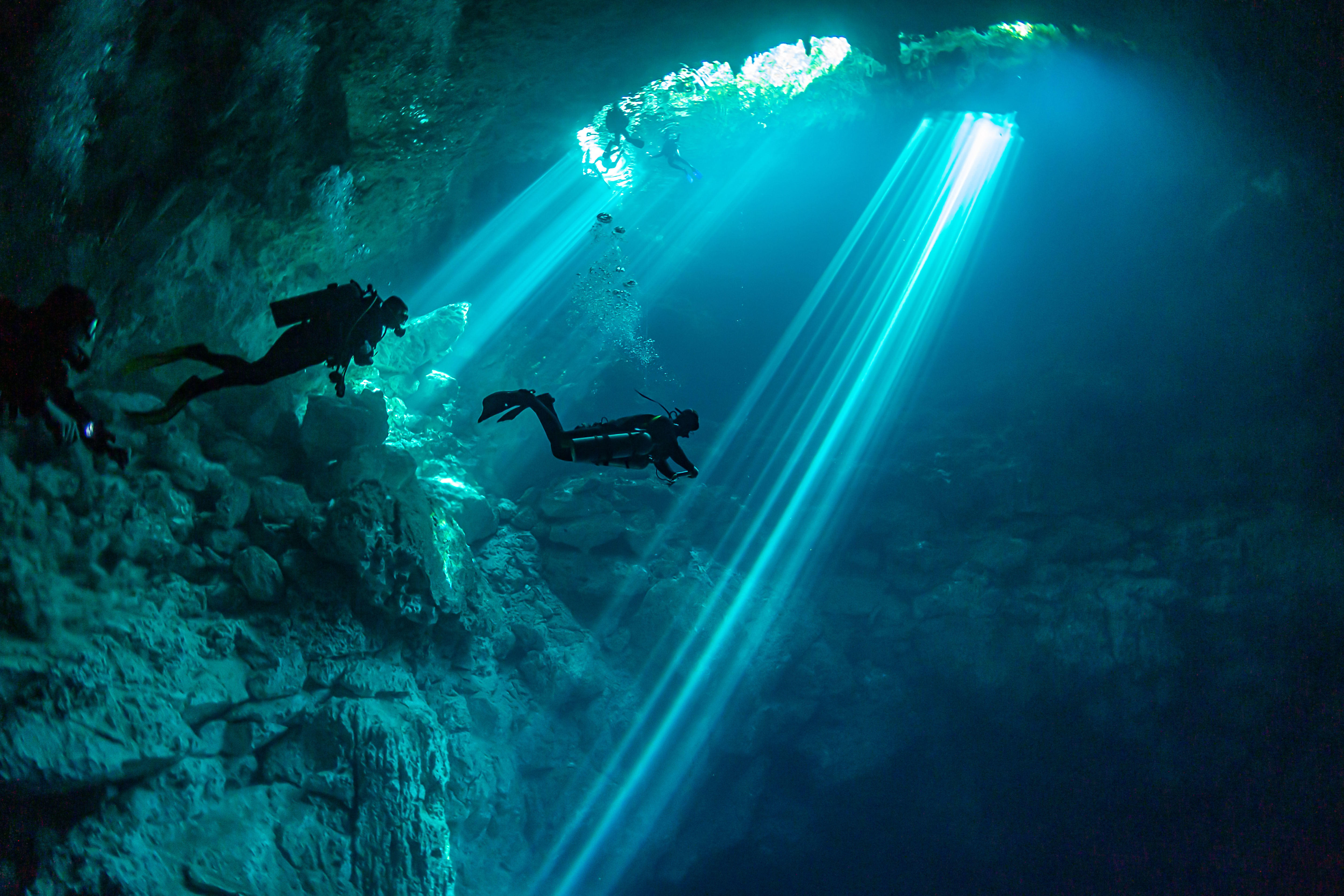 Take your pick from crystal-clear cenotes, coral atolls, a famous underwater sculpture museum or the second largest barrier reef in the world. Whichever you choose, Yucatan will charm you with its abundant reef life, whale sharks, striking coral formations and numerous rays.

Yucatán is a Mexican state located at the northern tip of the Yucatán Peninsula and faces the Gulf of Mexico. Scuba diving in the state of Yucatán is not as popular as diving elsewhere on the Yucatán Peninsula (Cozumel, Isla Mujeres, Cancún, etc.). However, one coveted diving spot is called Arrecife Alacranes, or Scorpion Reef, which is a reef system surrounding a handful of islands and coral atolls that are about 120km offshore. Arrecife Alacranes is protected as a national park and is considered the largest reef in the southern part of the Gulf of Mexico.

Aside from Arrecife Alacranes, there are plenty of diving opportunities on the east side of the Yucatán Peninsula. This is where the second largest barrier reef in the world (Mesoamerican Barrier Reef System) is located, which runs parallel to the coastline and is home to abundant marine flora and fauna such as sea turtles, molluscs, rays, eels, tropical fish, and seahorses.

Diving in the state of Yucatán is pretty much limited to Arrecife Alacranes, otherwise known as Scorpion Reef. This area consists of five small islands and coral atolls that are surrounded by reef and normally, visibility is 15-50m. Depending on the depth of where you dive, the type of fish you see will vary. In the deeper areas, divers will see blue and white marlin, tuna, dorado, wahoo, and sailfish. Other fish they may come across are yellowtail snapper, triggerfish, grouper, barracuda, king mackerel, and pompano. Arrecife Alacranes cannot be accessed by just anyone; divers must dive through a reputable dive shop that has the correct permits to enter this protected area.

The eastern Mexican state of Quintana Roo on the Yucatán Peninsula faces the Caribbean Sea and contains some of the most popular and diverse scuba diving sites, for example, an underwater sculpture museum, an underwater cave system on land, a national marine park, and a biosphere reserve containing countless shipwrecks.

Quintana Roo is also home to the best-known dive-able underwater cave system on land, called “Cenote Dos Ojos”. Located 100km south of Cancún, this pair of crystal clear cenotes boasts spectacular visibility (up to 40m!) and a gorgeous array of stalagmites, stalactites, and other cave features.

The Isla Mujeres National Marine Park is a reef system surrounding the island of Isla Mujeres, which is about 8km offshore from Cancún. It is well-known for being the final stop on the whale sharks’ migratory route, and for providing adventurous divers with the opportunity to encounter these gentle giants.

Cozumel Island is another national marine park located about 18km offshore from the tourist hub of Playa del Carmen and is famous for its thousands of different coral and tropical fish species.

The Sian Ka’an Biosphere Reserve, which begins about 150km southwest of Cancún, contains the “Banco Chinchorro” site, which consists of vibrant reefs and the remnants of many unfortunate ships that met their fate on this reef.

Other places to dive in Mexico