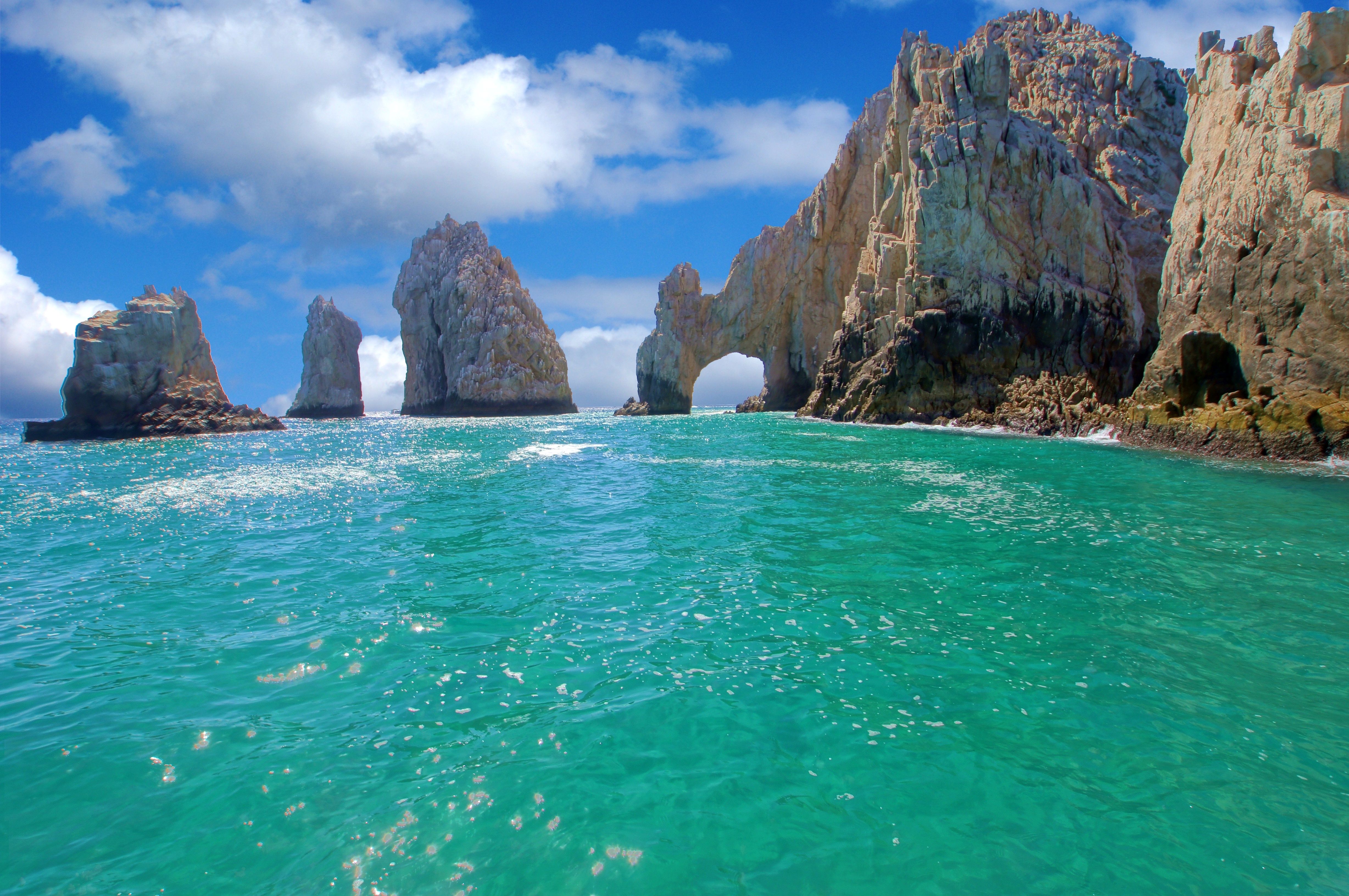 Scuba diving in Cabo San Lucas, the bustling resort town at the far southern tip of Baja California, offers a wealth of underwater sights and experiences. San Lucas Bay is a protected area with well-preserved dive sites and lots of fish life; it was actually the second marine park to be established in Mexico, after the Caribbean jewel of Cozumel! At Cabo San Lucas, the mighty Pacific Ocean meets the magical Sea of Cortez, which endows local dive sites with a mix of pelagic, migratory, and resident creatures. Seamounts, sea lions, hammerhead sharks, deep walls, unique ‘sand falls’, and plenty of fish and critters are all among the many landscapes and marine animals which make Cabo San Lucas diving unique.

Cabo San Lucas enjoys a high density of dive centers and tour options. It’s easy to visit Cabo Pulmo’s reef or even the whale sharks in La Paz with a Cabo San Lucas operator. It’s even easier to spend a day diving the uncrowded ‘Corridor’ sites on the way to San Jose del Cabo. For divers who want to go farther afield, Cabo San Lucas is the departure point for many liveaboards to Socorro and Guadalupe. For those staying in town, activities, nightlife and restaurants provide plenty of entertainment.

The fabled hammerheads at the dive site Gordo Banks are most reliably seen between June and November. Just before they arrive, silky sharks and whale sharks may also be seen at Gordo Banks from April through June. Schools of migrating mobula rays which number in the hundreds or more can be seen in the spring and autumn months. From December through April, humpback whales and grey whales can be found, as they nurse their young in the warm Baja waters. Orcas may even visit between January and June.

The water temperature in Cabo San Lucas ranges from 22 celsius / 72 Fahrenheit to 29 celsius / 84 Fahrenheit. The Pacific hurricane season may bring in some stormy weather between July and September, and September sees some rainy days.

To visit Socorro, divers should plan to be in Baja California Sur between November and May. The season for cage diving with great white sharks in Guadalupe is from August to October.

Cabo San Lucas may be the Baja dive hub with the widest range of dive options. There are plenty of dive centers, offering courses from beginner levels through technical diving. There are even dedicated tec-diving shops which specialize in taking divers to unexplored and deep destinations. Another special offering in Cabo San Lucas is bluewater shark diving. While these tours use snorkels instead of scuba gear, they bring visitors face to face with silky, blue, mako, and even hammerhead sharks, not to mention marlin and potentially mantas.

In San Lucas Bay, deep walls, reefs and wrecks can all be found. The bay is also a great location for night diving, which is offered at various Cabo San Lucas dive centers. Sealion encounters are also a local speciality. Of course, liveaboard diving in the offshore destinations of Socorro and Guadalupe can also be accessed from Cabo San Lucas.

The stars of Cabo San Lucas marine life are schooling hammerhead sharks at the dive site Gordo Banks. But these aren’t the only special sharks in the area, which also sees silky sharks, whale sharks, mako sharks and blue sharks. A small colony of playful sea lions can be observed frolicking against the iconic scenic backdrop of the arch at Land’s End, where Baja California Sur tapers to its southern point. Humpbacks, gray whales, and orcas grace Cabo San Lucas with their presence every year on their traditional migration routes between winter and summer habitats.

The famous dive site Gordo Banks, 45 kilometers from Cabo San Lucas, is a series of deep seamounts, the shallowest peak at a challenging 35 meters / 115 feet. Dive shops usually require a check dive before allowing divers on these current-washed pinnacles. For decades, Gordo Banks has been famous for schools of hammerhead sharks. They’re not as plentiful as they once were, but they can still be seen from June to November. Even without the hammerheads, there’s plenty of big and exciting fish around, such as pelagic predators (jacks, tuna and sailfish), mackerels in big schools, eagle and mobula rays, and schools of snapper and grouper. Even manta rays, silky sharks and whale sharks may be seen. The craggy surface of the seamount is covered with black coral bushes and sponges.

The dive site Pelican Rock in San Lucas Bay is an iconic local treasure due to its ‘sand falls’, an underwater cascade of sand which looks like a waterfall on land. The sand falls phenomenon is a rarely seen effect of friction between tectonic plates. Pelican Rock’s sand falls were discovered by Jacques Cousteau about 40 years ago. Marine life at Pelican Rock includes schools of snapper, porcupine and puffer fish, electric rays and moray eels. The dive site is great for all levels, and for night dives as well.

The dive site Land’s End can be found at the southern tip of the Baja peninsula, A dynamic mix of cold water from the open ocean and warm water from the bay attracts schools of barracuda, jack and baitfish. Near the surface, visitors can delight in the antics of a small colony of playful sea lions. To top it off, the Nuernberg wreck lies within easy reach of beginner and advanced divers. This German vessel was sunk during World War Two, but became uncovered only recently by Hurricane Odile in 2014. Schools of mobula rays and diving cormorants break the boundary between sea and air with the photogenic El Arco (arch) providing an impossibly perfect rocky rainbow in the background.

The dive site Neptune’s Finger contains two coral reefs and the biggest sandfall in the reserve, as well as a vertiginous wall dropping down 500 feet. Mantas, mobulas, and even sunfish (mola mola) have been seen here. Pelagic predators like amberjack cruise the blue, while resident turtles and groupers hang out near the coral.

Only 10 to 30 minutes north of Cabo San Lucas toward San Jose del Cabo are the uncrowded ‘Corridor’ dive sites. The trip to these rock reef formations is often accompanied by dolphins or breaching mobula rays. Some highlights include eagle rays at Whale’s Head, excellent coral at Gavilanes and schooling mobulas at Santa Maria. In general, the Corridor sites treat divers to schools of colorful reef fish, turtles, nurse sharks, whitetip reef sharks and if very lucky, a manta sighting!