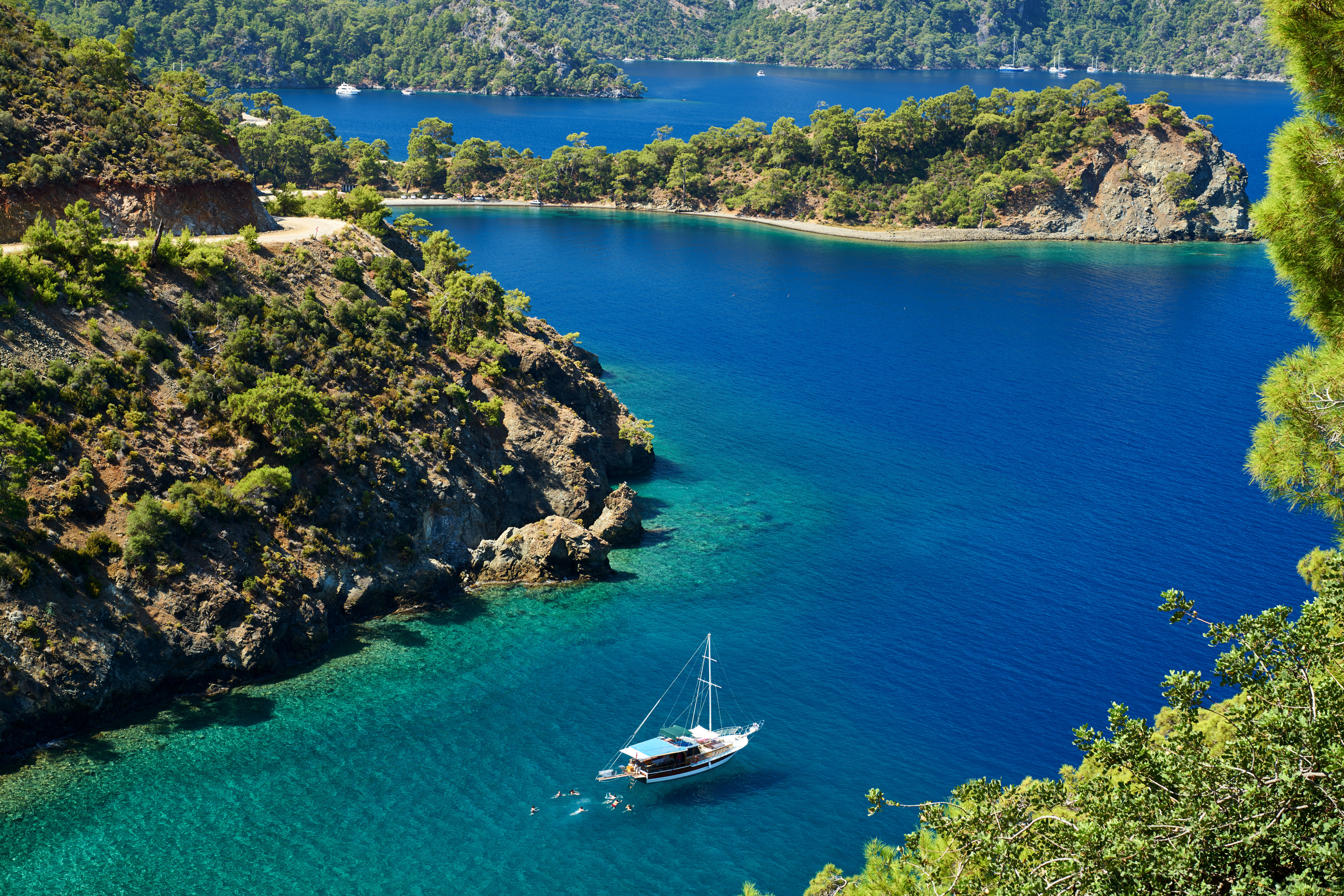 Turkey’s 8000km of coastline offers something for every diver, from calm protected reefs to sunken aircraft carriers and shipwrecks, plus caves and ancient relic sites. Plunging walls and pinnacles await adventurous divers and the waters are busy with monk seals, macro critters, fish, turtles and passing dolphins and whales.

Perfectly nestled in the heart of Eurasia, where Europe meets the Middle East, the stunningly beautiful country of Turkey promises unforgettable diving adventures across its 8,000km of coastline. With a warm Mediterranean climate, temperate oceans and an abundance of colorful marine life all in crystal-clear water, scuba diving in this culture-rich part of the world will excite even the most seasoned of divers.

Turkey offers a variety of diving, from calm, easy reefs in its ever-growing number of marine parks, to historical wrecks and caves, making it the perfect dive destination for divers of all levels of experience. Many of the naturally and purposefully sunk shipwrecks are protected, which has enabled them to become fantastic ecosystems housing a variety of creatures.

Diving conditions are usually excellent all through the diving season from April to November, with visibility up to 30 meters. The underwater seascape is exhilarating, with walls, drop-offs and caverns and reefs. You can enjoy all that turkey has to offer by diving with any of Turkey’s dive centers, which are aplenty. There are also dive resorts, and holiday resorts that normally have a dive center within their grounds, so there’s no lack of availability.

Thanks to Turkey’s great ocean conditions, it’s the perfect place to take dive courses of any level. Calm seas make an excellent chance for novices to obtain their open water license, while deeper wrecks and caverns give more experienced divers the opportunity to take advanced and specialty courses.

Turkey is a vast country, and has varied seasons throughout the year. Much of the nation experiences a Mediterranean climate, with mild winters and long, warm summers. While diving is possible all year round, the best diving season runs from May until November, thanks to warmer water temperatures ranging between 18ºC (64ºF) and 26ºC (79ºF). In the autumn and winter, diving is still a common activity, although it’s probably a good idea to opt for thicker exposure suits as the ocean isn’t as warm as in the summer months.

Summer is the tourist high season, starting around June and running until the end of August, when rainfall is minimal and the days are hot and dry. The diving in this season is preferred due to more pleasant temperatures than any other time of the year, however, the abundance of marine life usually remains relatively unchanged.

Turkey boasts a variety of diving, including reefs, walls, wrecks, caverns and canyons. Divers can even visit underwater art exhibitions that are held in some areas, which is a truly unique experience. Diving can be done by boat or shore, depending on the area and the dive operator.

Kaş, the diving capital of Turkey, is thought to be among the top 100 dive spots in the world, with over 30 dive sites that promise wreck and cave diving. Ancient relics are also possible to see underwater here. Diving in this part also offers reefs, walls, canyons. The well-known Ottoman shipwreck and the Sakarya/Duchess of York's vessel, that has been grounded underwater since 1943, are popular sites for divers in this area. Plus, Heybeli Island, near Kalkan, is another unmissable diving area that boasts breathtaking topography.

Bodrum similarly offers awesome walls, caves and pinnacles to explore. You can also enjoy epic wreck diving, including sunken boats, cars, an enormous aircraft carrier and an old intact propellor plane. With around 20 dive sites to discover, from Wolf's Point to Kargi Island, you won’t be disappointed by the underwater scenery. Visit the C47 Dakota plane, an ex-Turkish Air Force parachute plane, and the 29-meter SG115 cargo ship. There’s also the Pinar 1, which is a 37-meter Turkish Navy water tanker.

The blue depths off Fethiye in Mediterranean Turkey offer lots of colorful coral for reef dive enthusiasts, such as those found in Afkule where a wealth of corals, sponges and caverns await exploration. More colorful dive sites include Secret Garden, a 25 meter cavern, and Aladdin's Cavern, which boasts a variety of beautiful marine fauna and flora.

For all kinds of diving, from reef and wall, to wreck and cave diving, you shouldn’t miss out on a visit to Antalya. It’s Turkey’s second most popular tourist hot spot, and is particularly attractive to divers thanks to a multitude of varying dive sites and experiences. Notably, there’s Kemer's Aquarium Bay, an underwater world full of colorful fish and coral, and the Lighthouse Tunnel, which is a natural formation of tunnels and caves. For wreck lovers, there’s the Paris II shipwreck which met its end at the bottom of the ocean in 1917. There’s also the exciting Gelindoya shipwreck, which is said to be one of the oldest wrecks on Earth.

While Turkey’s coastline is lengthy, with a large number of dive sites to explore, marine life is a little less abundant than that in tropical oceans. But that doesn’t mean the diving is inferior. Among the dramatic underwater landscape of rocks, pinnacles, tunnels, caverns, canyons and walls, divers can encounter a myriad of healthy, vibrant marine species, from coral and sponges to adorable macro critters like crabs, nudibranchs and seahorses, and also larger animals like barracuda, grouper, rays, moray eels, octopus and even turtles. Plenty of colorful fish can be found too, such as The high number of encrusted wrecks also host an array of life, as do the easier, relaxing shallow reefs. What’s more, several species of dolphin and whale are often spotted in the water around turkey, so be sure to keep your eyes peeled for these majestic marine mammals.

Monk seals hang around the coast of Cesme and Kemer, while the coastal areas around Fethiye, Daylan, and Pataravous, divers can be blessed with loggerhead sea turtles. In the Aegean area, you can find dolphins, tuna and even some sharks. On the eastern side of Turkey, it’s a completely different world, where the underwater life differs from that found in the Mediterranean. Here, there are over six species of groupers and parrotfish are practically everywhere. In Kas, lots of other interesting species can be seen, including blue-spotted cornetfish, squirrelfish, rabbitfish, hatchet fish, and if you're lucky, triggerfish.

The area around Istanbul hosts a number of wonderful dive sites suitable for divers of all skill level. Neandros Island offers a vibrant experience, where divers can see tons of species, like chromis, anemone fish, crabs and around eight different kinds of starfish, making this place an underwater wonderland. Other great sites in Istanbul are Kursunburnu and Yassiada, which are both great for beginners and experienced divers alike, and boast plenty of exotic creatures.

Another tourist center with a  very popular dive site is the sunken Airbus A300, which was put there as an attraction for divers. A truly spectacular sight to see, this plane rests on the bottom at about 17 meters, and should not be missed if you’re in the area.

iAtop dive destination in Turkey, where divers can participate in varied dive sites suitable for all levels. Some of the best sites in the area are known to be Pirate’s Cave, Dropstone Cave, Lagun, The Aquarium Amphora and Old Wreck.

Shouldn’t be missed if diving in Turkey, where there are sensational dive sites to discover, including Aladdin’s Cavern and Secret Garden, where you can explore amazing walls and caverns teeming with vibrant marine life. Oludeniz, also in the Fethiye area is the last on the list, where diving is perfectly suited to all levels. Marine life is excellent and the water is normally crystal-clear. If you visit this part, visiting the Blue Cave is a must.

There are dive centers in Marmaris, Dalyan and Fethiye.

You can obtain your Advanced Adventurer in Bodrum.