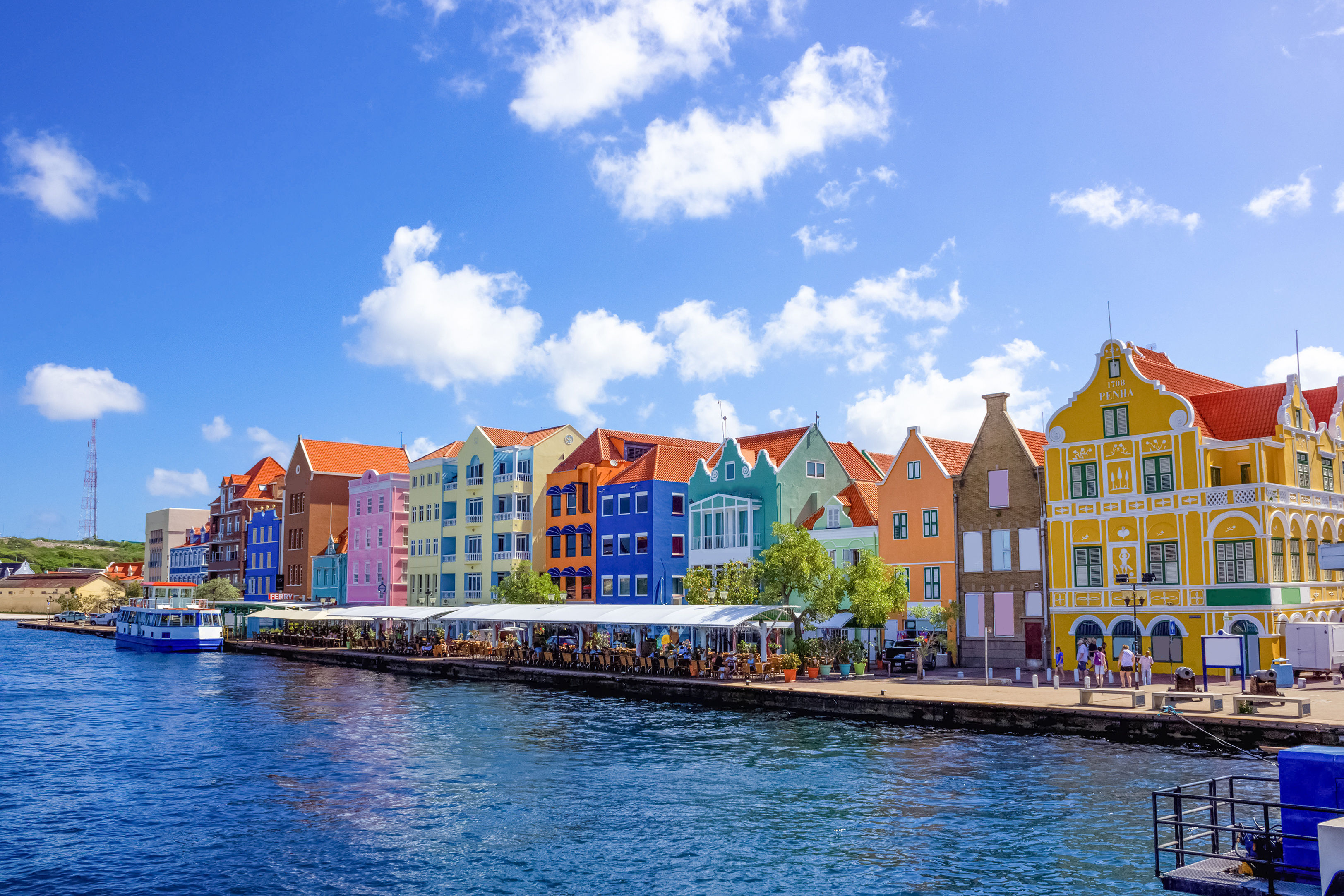 Easy, laidback shore diving with magnificent reefs, plus shallow walls and wrecks make Curaçao paradise for every diver. Dive in for vibrant Caribbean fish life, swirling pelagics, sea turtles, numerous sharks and one of the largest coral pillar formations in the Caribbean.

Curaçao is a small island in the Caribbean that neighbours Bonaire and Aruba and forms part of the ABC Islands in the Dutch Caribbean. Here divers can enjoy magnificent healthy reefs, great topography, walls and shipwrecks. The majority of scuba diving here can be done from the shore, and to top it off, the dive sites are mostly protected from strong currents, meaning diving here is very easy and relaxing, and perfect for beginner divers. Boat diving is also an option here, with most dive operators choosing to do so.

Visibility is mostly excellent ranging from 16-30 meters (60-100ft), thanks to minimal river runoff from the island. Plus, the water is warm all year around, so there’s really not a bad time to dive in Curaçao.

Though it’s a relatively small island, Curaçao has plenty of dive centers and dive resorts that cater to divers of all levels. Most of the 85 or so dive sites here are located on the southwest of the island, but there are some in the northern parts, which are more suited for advanced divers. For those wanting to take dive courses, it’s the perfect place to do so thanks to its agreeable conditions.

Diving in Curaçao is great all year thanks to good weather and a warm ocean averaging around 25°C (78°F) in winter and 27°C (82°F) in summer. Marine life is mostly unaffected by the slight seasonal changes, so divers can benefit from fantastic dives no matter the season.

April to November is the dry season, during which April to June experiences the calmest weather. Island has minimal rain and enjoys plenty of sun during this season. Ocean conditions are normally calm, with water temperatures resting around 29°C (85°F) and air temperatures lingering around 31°C (89°F).

December to March is the rainy season, when the island experiences a slight drop in temperature, with air temperatures lowering to 29°C (85°F) and water temperatures dropping to 26°C (79°F). Rain occurs more, however, showers are only brief and quite refreshing. Furthermore, this period is also the low season, when great deals on diving and hotels can be found.

There’s a brief windy period in Curaçao due to trade winds, which occur from January to April, which isn’t too much of a disadvantage for those that enjoy a cooling breeze in the tropical heat

There’s a wealth of variety in Curaçao’s dive sites, despite its size. Offering amazing walls, reefs and wrecks accessible by shore or boat, there’s something for everyone no matter your level of experience. While many of the sites can be accessed by shore, boat diving is the most popular choice.

For a wall and reef dive suitable for all divers and snorkelers, visit Playa Kalki, where the wall plunges to 18 metres (60 feet). Easily accessible and located near the cove’s beach, divers can enjoy beautiful coral formations seething with colorful reef fish.

The famous Tugboat at Caracasbaai is a great site for those wanting to experience a wall and wreck dive combined. The wall that reaches 30 metres (100 feet) is overflowing with corals, fish, and macro life, and the wreck itself is hosts a ton of reef fish, tube sponges and moray eels, all at only 5 meters (16 feet) deep.

Diving in Curaçao offers the usual highlights of Caribbean diving, including turtles, schools of fish, numerous shark species, healthy reefs, a variety of coral species, and if you’re lucky, dolphins.

A good place to spot not only vibrant reefs, parrotfish, rays and other colorful fish, but also nurse sharks and groupers, is The Valley. The name refers to a valley between two parallel reefs. This site is a favourite due to having a few harder-to-find creatures living here.

At Beacon Point, divers can encounter barracudas, jacks and groups, along with one of the largest coral pillar formations in the Caribbean.

Barracuda Point (Punt’i Piku) is also great for barracuda lovers, where they often follow divers around this site. In addition, sea turtles and jacks can be spotted here, as well as some amazing coral structures.

With around 85 dive sites in Curaçao, it’s difficult to feature only a few on the favourites list. But according to many divers that have been lucky enough to visit, there are some top dive spot recommendations, and all for good reason.

Starting with Snake Bay, here you’ll find a myriad of reef fish and some pelagics. Rays, turtles and jacks are spotted here, and if you’re lucky, you may even see some dolphins.

About an hour from the capital of Willemstad on the northwest coast, Mushroom Forest is among the top diving spots in Curaçao. It features unique geological coral formations throughout the reef that resemble large mushrooms, hence the site name. It’s said to be like diving in a fantasy world, where divers meet various colorful fish, such as damselfish, trunkfish, butterflyfish, bluehead wrasse, and even friendly turtles.

As previously mentioned, The Valley is a must for divers visiting Curaçao. The two parallel reefs are teeming with fish, large and small, including groupers and even nurse sharks.

Finally, there’s Alice in Wonderland dive site (also known as Playa Kalki), which has also been mentioned previously. It’s likely the most popular dive sites in the country, and boasts beautiful colonies of strange coral formations, along with an abundance of fish species and rays. It’s also said to be among the best night diving spots that Curaçao has to offer.

There are dive centers in Willemstad, Jan Thiel and Sint Michiel.

The top dive centers are the Curious 2 Dive, Scuba Lodge and Goby Divers and Watersports N.V..

You can obtain your Open Water Diver in Willemstad.

You can obtain your Advanced Open Water Diver in Willemstad.

Diving is available in Willemstad, Jan Thiel and Sint Michiel.